What You Need to Know Before you Buy a Siberian Husky

Reading this will only take a couple of minutes

Before you decide to buy that cute Siberian Husky or adopt that sad looking Siberian Husky Welfare Dog, please do your homework and make absolutely sure that a Siberian Husky is for you! You would also do well to check out the other information pages. A good place to start is here though! Here’s a list of ways Huskies are special.

Huskies are very trainable, but it’s tricky to get them to obey commands every time. They tend to weigh up the benefits before doing things. Is there a treat that I can see? Will I get cuddles? Am I being shouted at? Did I get a treat last time? Will this be more fun than my current activity?

Huskies are pack animals, so require a rigid hierarchy in the family (be it humans or other dogs). They will also challenge that hierarchy if they see any opportunity. As the Alpha, you will need to learn how to deal with this.

Huskies like to figure out escape routes and test them. If you leave a kitchen window open, they will be at a BBQ miles away with their “new family” before you notice. They will often enter a new area and immediately check out all the edges before they are happy. 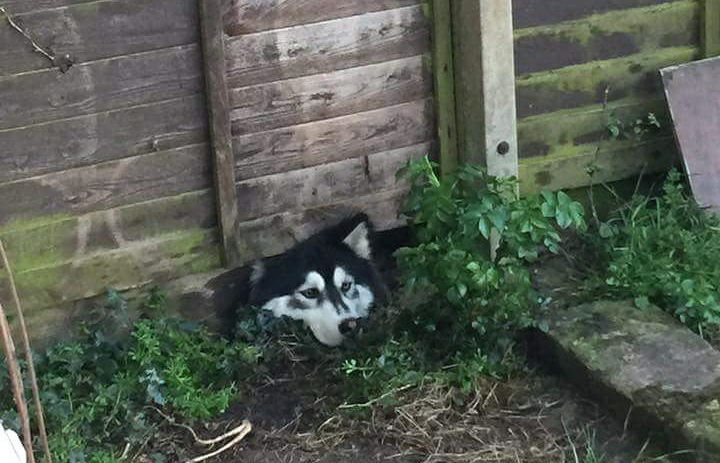 Huskies are normally great with children so are good family dogs. They are also good with anyone, so they make rubbish guard dogs, making friends with intruders or just ignoring them completely. They are often very playful, so must be trained to know what sort of play is suitable for children, but when calm a normal husky will put up with an enormous amount of stroking and cuddling from children.

Husky fur allows them to cope with a wide range of temperatures. The longer fur helps keep them cool and the combination of longer fur and base coat keeps them warm. They shed fur a fair bit all year around, but at certain times of , their base coat comes out fast and in UK climates, you’ll need to regularly groom them to keep them comfortable. Just a few minutes each day with a long toothed brush will generate a huge mound of fur and help a lot in the Summer months.

As a puppy, a Husky will trot around next to you quite obediently and may not even try and run away from your garden. This doesn’t last long though and you’ll need fencing if you want to keep it out of trouble. Chain fencing is no good – they will climb this while laughing at you. 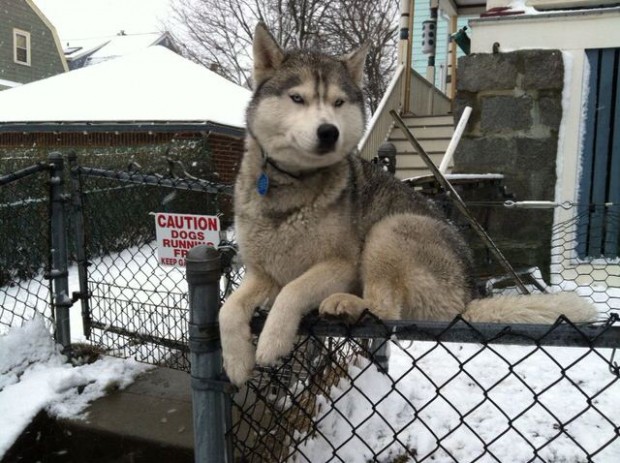 SHWA adoption contracts state that you agree they will be kept on the lead at all times in public. If you don’t want to agree to this, don’t adopt a Husky.

Many Huskies are hunters and love nothing more than stalking, pouncing and chasing. of animal doesn’t seem to be an issue. If it moves and looks edible, this is a priority. It’s not so much that it’s fun. It’s just built-in. Thus the lead. Thus the fence (especially if you live anywhere near livestock). If they are chasing something, it doesn’t matter how tasty your treats are. Treats don’t run, making them less attractive to the Husky. It’s very tempting to think you can let them off a lead in some places, perhaps the beach, but remember the bit about exploring edges? There are no edges on a beach… And note that a pheasant crossing a road will get all the focus, rather than a car about to hit your Husky. Don’t risk it. Find your local secure field instead.

If they get attention when they ask for it, they are happy. If you ignore them when attention seeking, you may find they seek other ways of amusing themselves. Eating shoes. Eating walls, Eating fences. Eating your computer cables. They will do things you don’t like, much like any other dog. They will quite happily settle into a but are very happy when the routine is broken.

If you want to know why Huskies have been bred to be like this, then read on. Otherwise, if you think you could be a good match for Husky, contact us via the link in the menu.

The Siberian Husky is the smallest and fastest of the Arctic sled dog breeds. Siberians are, in part, of the dogs developed over a 3000 year period by the Chukchi people of Siberia, although a devastating series of famines during the 1860’s meant that relatively few of the original Chukchi dogs survived and these had to be cross-bred to other Arctic sled breeds to re-establish the Chukchi sled-dog stock. A nomadic, hunting people, the Chukchi required a dog which could withstand both the extreme Arctic winters and the warm Siberian summers; could work amicably as part of a large team; could pull light loads over long distances at moderate speed; and which could live happily in the tents and igloos with the Chukchi and their children. The result was the dog which formed the basis for what we now know as the Siberian Husky. The breed started its new career as a working, racing, showing and pet dog after numbers were imported into the US, Canada and Alaska in the early years of the 20th Century, to work in the goldfields and compete in the developing sport of sled dog racing. Siberians came to public prominence in 1925 when, amongst other sled dogs, they took part in the famous “Serum Run” race against time, to Nome, a remote coastal town in Alaska. An epidemic of diphtheria had broken out in Nome and the only way of getting to Nome in the depths of the Alaskan winter was by dog sled. Although many mushers and their dog teams took part in this heroic venture, history records that one man, Leonhard Seppala and his team of Siberian Huskies, played a pivotal role in its success. Seppala and his team ran more than six times as far as any other team – 340 miles in all – in the worst weather conditions that the Alaskan winter could throw at them. This feat of strength, and fortitude, more than anything sums up the capabilities of the Siberian Husky. Behind the beautiful exterior and friendly manner lie muscles of steel, a tireless spirit and a timeless desire to run. For more information on the early history of the breed, look in the Siberian Info menu.

The very first Siberians arrived in the UK in the 1940’s, but it was not until the 1960’s that more dogs were imported and their establishment as a breed here in the UK was assured. Other sled dogs which can be seen in the UK today include Samoyeds, Canadian Eskimo Dogs, Greenland Dogs and Alaskan Malamutes. There are also a few Alaskan Huskies, but these are not purebred dogs, they are hybrids raised specifically for racing.

Siberian Huskies, to those who love the breed, are the most wonderful dogs in the world! They are not a dog for however. Siberian Huskies are not Labradors – they are an independent, ‘primitive’ breed which loves human company, but which is quite capable of surviving without it. Their particular strengths and qualities sometimes make them difficult to live with. To start with, they are extremely clever escape artists. They can jump or climb over, dig under, eat through or break down most things you try to contain them with. They can be extremely destructive, although this is usually down to boredom – especially if left alone for long periods. Huskies should never be allowed off in an unenclosed area. They will run and run – not to get away from you, but simply for the pleasure of running (and maybe to catch and kill that cat or squirrel they just spotted!).

Husky puppies may fool you into thinking they are extremely obedient and can safely go off lead. Don’t believe it for a moment! Once they reach their “teenage” stage obedience will become optional and the legendary selective deafness of the husky will come into play. Too many have ended up dead on the roads or shot by farmers to take the unnecessary risk of allowing them off-lead in unenclosed areas. We recommend that they trained to however, as the likelihood is that at some time your dog might slip its lead or squeeze through a gate as it is being closed. If it is trained to recall at least you have a chance of getting it to return.

They are fierce and effective natural predators. During the summer, the Chukchi would let them loose to hunt for themselves and they have lost neither the instinct nor the ability. Life with cats and other small animals can sometimes be “interesting.” Many Siberians come into rescue because they have killed cats or sheep but they were, literally, only doing what comes naturally. Siberians are amazingly intelligent and can do anything a border collie can do (only better) – the difference is, a husky will perform a ‘trick’ once or twice and lose interest – a collie will carry on repeating it just to please its human! On the positive side, Siberians are the most wonderfully affectionate and loving dogs you could ever hope to meet. Unconditional love is what they do best. Whether you are in a good mood, a bad mood, angry, depressed, ill or well, your husky will still love you and show it actively.

Although they are working dogs and really love to work, they are just as happy to be walked regularly and live life as a couch potato. We often say that they have only two speeds – full speed and asleep! You will be amazed at how much exercise a husky can take without tiring, and how much sleep a husky is capable of!

Siberian Huskies are probably the world’s worst guard dogs. They love everyone (including burglars) and will sell their soul for a cuddle or a tasty treat. Their striking looks are sometimes their downfall as people are occasionally tempted to acquire a Husky without “doing their homework” on the breed. Then, later, when the puppy eats the sofa or destroys the garden, it is shunted off into rescue. If you are tempted by a Husky, take some time to talk to other Husky owners before you take the big step into ownership. Huskies usually live to 15 at least. Are you willing to make a similar commitment to having a child??? If you decide a Siberian Husky is for you and that you would like to give a Welfare Siberian a second chance, go to our adoption page.

View the Adoption Page
This site uses cookies for maximum awesomeness. If you continue we will assume that you are happy with that.
OkPrivacy Policy